Fire and Bark Beetles - Resources from the NRFSN website

In the Northern Rockies region, bark beetle (Dendroctonus spp.) outbreaks and their potential effects on coniferous fuels, fire behavior, fire severity, and forest resilience have been a focus of recent scientific research. The NRFSN has highlighted this critical management issue by presenting and briefly summarizing the resources available on the fire and bark beetle topics important to fire and land managers. 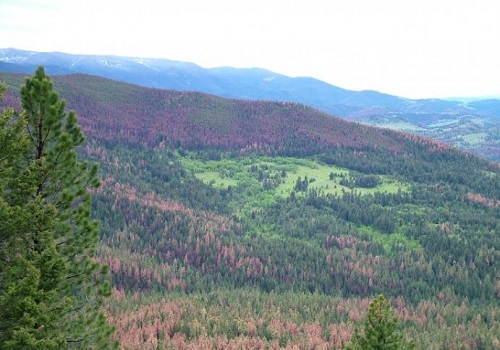 Bark beetle effects on fuels and fire behavior - While the effects of bark beetle outbreaks on fuels and stand structure are well documented, the effects on fire behavior are complex, variable, and less well understood - mostly because of the challenges associated with systematically documenting actual fire behavior as a fire occurs. Predictable fuel structure changes occur following bark beetle attacks across forested systems. Once bark beetles reach outbreak levels, attacked stands experience changes in structure and flammability. Immediately following attack from bark beetles, needles on attacked trees decrease in moisture and increase in flammability - even before they change color. Needles on beetle-killed trees turn red about one year after the tree is attacked, at which point the red needles fall from the crown over the next two to three years. At this red stage, the moisture content decreases and chemical changes occur in the needles making tree crowns highly flammable, but falling needles results in fewer and fewer flammable red needles in the crown over time. After about ten years into the bark beetle outbreak, trees begin to drop branches, and with more time, tree trunks begin to fall increasing surface fuel loadings. As branches and trees fall, light reaching the forest floor increases, and understory biomass increases. The understory vegetation growth then provides ladder fuels.

Though fuel structure changes are predictable, the variability in the timing and pattern of the changes depend on site-specific factors such as stand condition before the attack and rate and amount of tree mortality. Predicting fire behavior in these highly heterogeneous stands is challenging. Stand heterogeneity is not well captured or accounted for in operational fire behavior models. Physics-based models, although not without their limitations, have improved fire behavior predictions in beetle-killed forests. Physics-based modeling indicates significant increases in flammability can occur immediately following mountain pine beetle outbreaks in lodgepole pine forests. Flammability, which affects how intensely fires burn, has important implications for firefighter and community safety. While both attacked and unattacked lodgepole pine stands might burn in a crown fire under the right weather conditions, the beetle-attacked stand could burn twice as fast and have a much greater heat release rate, making it much more unpredictable and dangerous for firefighters. Improved understanding of fire behavior in beetle-killed forests is a very active area of fire science research, which involves development of more sensitive and accurate modeling and field validation. 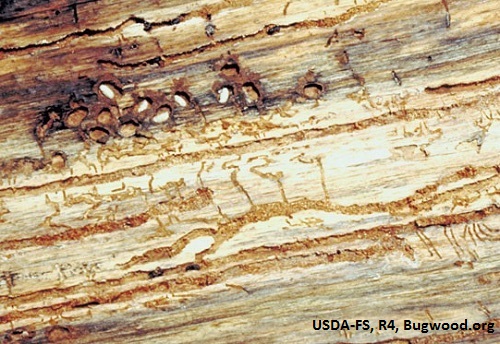 Bark beetle outbreaks and climate change - Because bark beetle population success is directly linked to seasonal temperatures, a warming climate could mean more frequent and larger outbreaks. For the spruce beetle (D. rufipennis), high summer temperatures are associated with increased numbers of beetles completing their lifecycle in one year rather than two. A one-year lifecycle increases the potential for outbreaks and thus tree mortality. Modeling climate change and its potential effects on mountain pine beetle (D. ponderosae) suggests that increased probability of surviving the less-extreme cold temperatures can increase population success and thus outbreak potential. When thermal habitats for mountain pine beetles were modeled with predicted climate changes in the Northern Rockies, it was the low- and high-elevation habitats that were best suited to future growth and survival of the beetles. This differs from the observed pattern of bark beetle outbreaks, which were concentrated in mid-elevation forests between 1993-2001.

Adding another layer of complexity to the effects of climate change on bark beetle outbreaks are the impacts of disturbance interactions. It is well established that climate change in the West will mean warmer temperatures, earlier snow melt, longer fire seasons, more large fires, and more annual area burned. It is also well established that bark beetles preferentially attack stressed trees, which can include trees damaged by fire or weakened by prolonged heat or lack of water. However, the effect of mountain pine beetle damage on western fire occurrence was evaluated for the recent past (1984-2013). Occurrence of large western fires was driven by climate, specifically high temperatures and low precipitation, and not mountain pine beetle-caused forest damage or mortality. Fire occurrence and fire size are just one piece to the potential fire, bark beetle, and climate change interaction impacts. How changes in fire frequency and/or size along with warmer temperatures will affect future bark beetle outbreaks remains to be seen. There is also potential that the dynamics of disturbance interactions will change over time. 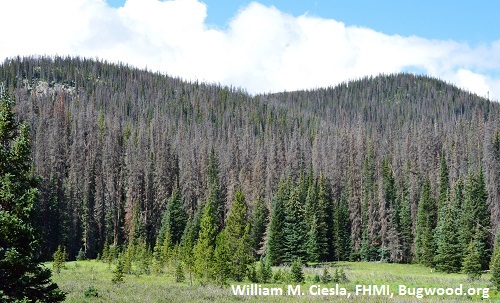 Bark beetle effects on fire severity, post-fire regeneration, and ecosystem resilience - Fire severity (i.e., the ecological effects of wildfire, measured with characteristics such as tree mortality, char height, and fuel consumption) in beetle-attacked stands is generally not related to the severity or stage of prefire beetle outbreaks. Typically, fire severity varies with burning conditions and topography, such that the greatest fire severity occurs during extreme weather (warm, dry, windy conditions) and on higher hillslope positions - regardless of prefire beetle outbreaks. The impact of beetle outbreaks and subsequent wildfire on postfire tree regeneration appears to differ by host tree species. In lodgepole pine forests, regeneration is largely unaffected by the severity of prefire beetle outbreaks, but rather is driven by the availability and abundance of mature trees with serotinous cones. These trees retain their cones (and thus their seed source) long after being killed by beetles. However, in non-serotinous seed producing species such as Douglas-fir, early postfire (3 years) tree regeneration decreased with the number of prefire beetle-killed trees where fire severity was low and regeneration was low regardless of outbreak severity where areas burned in stand-replacing crown fires or severe surface fires. Lower postfire regeneration with increased beetle-kill may not be a lasting effect, however. Since another study in dry mixed-conifer stands, did not detect differences in seedling densities in undisturbed, beetle-killed, burned, and beetle-killed and burned stands, but did find older seedling cohorts (3-6 years old) in beetle-killed and burned stands.

Forests have persisted with and regenerated following bark beetle outbreaks and fires for millennia. These disturbance processes and interactions are important to the maintenance of diversity and heterogeneity of the Northern Rockies landscape. Climate change could impact the success of bark beetles, increase fire size and frequency, affect interactions between these disturbances, and limit or alter regeneration trajectories. However, certain management activities (e.g. thinning with or without prescribed fire in fire-dependent forests) may be used to increase ecosystem resilience by increasing tree growth and beetle resistance. Compromised forest resiliency could be observed as changes in the age, extent, or location of vegetation or forest types. Although ecosystem resiliency is perhaps best understood and appreciated through very long-term observation, researchers are currently devising and utilizing methods to study resiliency as disturbance interactions change with climate changes.